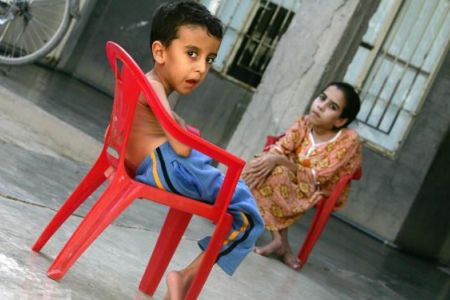 Children are born grossly deformed - caused by exposure to depleted uranium? The truth about this nasty substance, used in armour-penetrating weaponry by US and UK forces, is bound to emerge soon.

Italy has just admitted that the deaths of 98 of its service personnel were due to exposure to depleted uranium (DU).  (Former MSP Bill Wilson and myself campaigned to get the UK Ministry of Defence to take this issue seriously.  Later we were not sad to see the equivocating Liam Fox forced to resign in disgrace, although this was due to his friendship with Adam Werritty, a friend of Mossad. Bill and myself also campaigned for the human rights of Palestinians, incidentally, so ideologically it’s clear we had little in common with Fox and his Zionist cronies.)

It recently emerged that the UK armed forces minister, Nick Harvey, misled MSPs about a review which he claimed showed that DU weapons were permissible on humanitarian and environmental grounds under the Geneva conventions.  The review did not exist!

In time I believe:

I am a writer specialising in non-fiction, particularly in assisting people with their biographies.
View all posts by biowrite →
This entry was posted in Politics and tagged depleted uranium, Israel, liam fox, Zionists, zionsim. Bookmark the permalink.