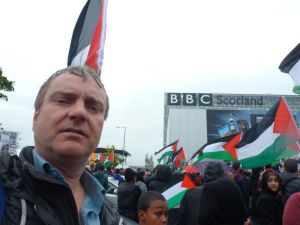 I was one of thousands of protesters at the BBC’s Glasgow headquarters. We were objecting to the BBC’s blatant pro-Israeli bias

The BBC, de facto ally of the murderous Israeli regime, has possibly come as close as it ever will to admitting that its coverage of what is happening in Gaza is…. ahem… partial. Someone’s head may roll for not considering the admission contained in the words used in this morning’s episode of the Today programme on Radio 4.

In a report on the support of West Bank Palestinians for those being butchered in Gaza, the BBC said something along the lines of ‘the media in the West Bank expose them to more horrific images of what is happening in Gaza than are shown on the Western media’.

This is about as graphic as the BBC gets, but even this image speaks volumes. This wee girl is witnessing the carnage in Gaza. The caption reads: ‘On the festival of Eid al-Fitr, children were out playing in Gaza City and witnessed explosions and their aftermath.’

The BBC undoubtedly includes itself in ‘Western media’ . Just think, then, what this means. The implication of its words is that the West Bankers are stirred to demonstrate by images of what is really happening in Gaza, not revealed by the BBC. We can therefore assume that the public reaction against gross abuses of human rights by the Israeli regime here in the UK would be more extreme if we were also shown what is happening. In effect, then, the BC admits that it is batting for Israel.

Israeli spin-doctor Mark Regev is given so much airtime he should be on a BBC salary.

Want more evidence? Note the hugely disproportionate time given by the BBC to slick Israeli spokesmen (sticking doggedly to the script written for them by a US PR expert).  I am thinking of launching a campaign for the sinisterly smooth Mark Regev to receive a BBC salary.

…Oh, here’s a footnote on the Today programme. The piece on the West Bank and Gaza was tastelessly followed by a long and frivolous discussion on forthcoming porn-flick, 50 Shades of Grey. Draw your own conclusions about the BBC’s priorities.

You may wish to read some of my other pieces on Israel/Palestine/Gaza.

I am a writer specialising in non-fiction, particularly in assisting people with their biographies.
View all posts by biowrite →
This entry was posted in Politics, Videos and tagged BBC, BBC bias, gaza, Israeli, Israelis, Mark Regev, Palestine, Palestinians, West Bank, zionism, Zionists. Bookmark the permalink.